This education program was more advanced and well suited to the Advanced Higher pupils. The Advanced Higher Art pupils had just completed their installation project, which were based on their sketchbook research and developments, and I was given the opportunity to introduce them to casting with glass.

I demonstrated the process of casting using the investment method and, in this case, we used clay forms, a plaster mix and System 96 glass.

The pupils created their clay forms to a specific size that would fit within a set mould shape.  This is important as the depth of the glass influences the kiln firing schedule, and we wanted to keep this short and simple.  We used recycled plastic food containers for the mould frames; these are easy to get and can be reused several times and reduce waste.

Each of the damp clay forms were weighed and this weight then informed the calculation to establish the volume of glass required for each casting.

The pupils selected their glass colours and then prepared their glass into small pieces which allowed easy loading of the moulds.  The glass always looks too much when loaded however it soon pours into the mould and fills all of the voids.  In this instance we incorporated a small overflow area at the top of the forms to accommodate this process.

Once the pieces were fired the casts were divested from their moulds, washed and then polished to create a lovely finish.

If I said that there was a lot of excitement when the pieces were being divested then that would be an understatement; the wonder of releasing these beautiful glass artefacts from the fired plaster is always magical and I think the pupils, even the cool ones, couldn’t contain their excitement.  The pupils then explored their cast pieces with light and cameras in order to produce completed images for their Advanced Higher Art portfolio submissions. I’ve no doubt that the SQA assessors would have been suitably impressed with the unique and high quality results of the pupils from Larbert High School. Well done all of you!

Back to top
CGS Commendation
Truly honoured!
I’d like too thank Contemporary Glass Society and The Worshipful Company of Glass Sellers of London
for awarding me a commendation in this year’s CGS New Graduate Review 2021.
To be selected, along with the other fantastic winners, to be included in the published magazine and to be circulated internationally by NEUES GLAS – NEW GLASS: art & architecture is indeed an honour.
Thank you to everyone involved and congratulations to all the other artists.
To see and read more, follow this link to my stained glass section. 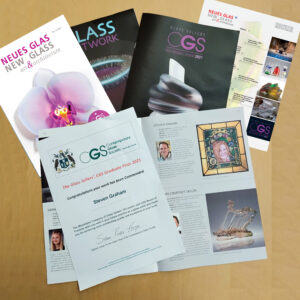